Thinking I had a day in Berlin to sleep in a bit before heading to Warsaw, was actually a planning error!

When the computer knows you’re in Berlin, and your Google Calendar thinks you’re still in New York, strange things happen. Not being on the planned train is just one of them. My second day in Berlin did not go as planned.

Before going to bed yesterday in Berlin, I checked the time on my schedule for today’s train. Since my travel app has a link with my Google schedule, I could see I was about to leave between noon and 1am from Berlin to Warsaw. Plenty of time to sleep in (finally – after a couple of hectic days) and visit some more of the city.

So it happens. I wake up a bit after 8 am, take my shower, and have a look at my mail. That’s when I realize there was something wrong. I thought I had a train at noon, it now says that train was at 6 am. Adrenaline rush and panic. A brief check on the train sites shows that there’s another train for Poland at 9:37 am from Berlin. I quickly shove everything in my backpack, say farewell to my excellent host, and get in an Uber to the station. Got there by 9:05, with 30 minutes to go. 10 people ahead of me, but the German efficiency did not fail me. The breakfast was quickly replaced on my way to the train by a Snickers bar and a bottle of water, hoping I would find a cup of coffee on the train to Warsaw. And I got on this train. Reserved seat and all. Sorry Berlin for the quick departure, I’ll be back!

The train to Warsaw makes several stops, so the scenery of people surrounding me changed often as well. On the first stop in Poland, two polish men step on the train. They clearly had hit the local pub while waiting for this train. They both carry some extra beer and are clearly on their way for a good weekend. Next, a family gets on. Mom, dad, and a daughter. The mom puts down the handbag on the seat next to me for a second, just long enough for me to see the big bottle of vodka in the bag. I feel too sober for this all of a sudden.

When we cross the border between Germany and Poland, a Polish crew replaced the German. The new crew in the bar starts distributing coffee, for free. Thank you, Polish Rail!

I get to Warsaw as (re)scheduled. I find an Uber and get to the Airbnb. It’s one of those places on Airbnb that are bought with the simple and only reason to make money on Airbnb. Nobody ever lived here, nothing cozy and a horrible bed. But after this day, having a bed is pretty OK. Having access to a washing machine is the best part of this place. When on the road like this, having a washing machine in the place where I stay saves a ton of time.

I’m in Poland. One of the European thingies is that I’m still in Shengen (so no need to show my passport at the border) but I’m not in the Euro-zone anymore and will need zlotys till I leave Poland again.

My time issues aren’t over. When preparing for this trip, it was not possible to remotely book tickets between Warsaw and Bialystok, my next destination near the border between Poland and Belarus. In the railway station in Warsaw, it turned out that the train listed on the website at 5 pm isn’t running, and that I need to be on a train in the early afternoon.

After arriving late yesterday and leaving earlier today, not much time to enjoy Warsaw. I’ll keep my zlotys, so I can spend them when I take the time here later. And so I was on my way in a modern, comfortable train to Bialystok. Close to 200 kilometers added to the train travel.

Bialystok is a small town, but my Airbnb host had told me nevertheless to take a taxi to the place. I show the address to the driver, who gets lost in this town. When we arrive – after he called his dispatching a couple of times – at the destination, my host is waiting for me at the door. He looks in the taxi and sees the meter (converted about $3) and starts yelling at my driver that he’s a crook and a thief (yep, I understand Polish all of a sudden during this conversation!). The driver admits his error and accepts 10 zlotys for the fare when my host tells him he will call his dispatcher.

My host shows me the place: a spacious apartment with 2 bedrooms and a small kitchen. I’m so in need of a decent meal that I look forward to cooking a small meal. But first, a walk back to the railway station. Without my heavy backpack, it’s a nice walk in the evening sun. Since I could not buy my ticket to Vilnius in Warsaw, I have to buy it here. There’s a long line waiting, but it moves fast. The english-speaking sign on the window is for decoration only, so my notebook comes in handy to write the details for my ticket, get the price written by the attendant, and confirm that the train leaves at 7:40 in Bialystok.

Back at my place, I find the nearest supermarket, where I find no fresh, and where the full choice of vegetables is tomato, onion, and radishes. Instead of cooking, I go for a salad.

The next morning I find a small store in the building willing to call me a taxi, that arrives promptly. My train is waiting already and I find space for all my stuff. Bye-bye Poland, it was a short visit, not completely as I planned it. 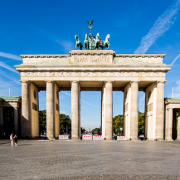 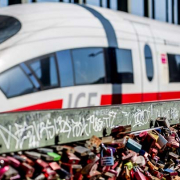 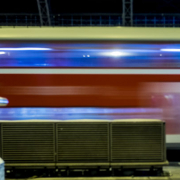 Night train between Cologne (Koln) and Berlin
Scroll to top