I visit Santiago de Chile on my way back from Antarctica. I had 3 days to visit old friends from New York and to catch a glimpse of a city I only knew from the newspapers and books.

Santiago de Chile was not my first stop in Chile. When I sailed back from Antarctica, I stopped in Cape Horn, Puerto Toro and Puerto Williams. These are all Chilean locations in the south of the country. The Beagle Channel is the border between Chile and Argentina, two pretty hostile countries still. When I visit Santiago de Chile, I meet a completely different country.

Augusto Pinochet was a dictator in Chile till 1990. Much of my youth, I remember him being in charge. But only now I start to understand how he stayed in power so long. When the UK fought the war in the Falklands against Argentina, Pinochet’s regime provide Thatcher with the needed intelligence about the Argentina army and air force.

It’s kind of ironic that it was Great Brittain that arrested him.

But what was the most shocking to me, were the uniforms of the guards at the palace in Santiago De Chile. These so reminded me of the images of that era. It felt as if Pinochet would walk out of that palace any moment again.

La Moneda is the office of the president. But more than that for me, it’s the place where President Allende committed suicide during the coup by Pinochet. Walking in a city like this brings the memories of reading the newspaper as a child (when it comes to the Falkland war for example) or what I read in books (about Allende) to life.

Cafe Con Piernas, and the emancipation

On the plane from Buenos Aires to Chile De Santiago, I met a couple of bright young women, who worked in Brazil and Argentina, but were on their way home. We discussed why they traveled abroad, and the answer came as a shock. In their eyes, the men in Chile had not evolved with emancipation the same way they did. While they had studied, they told me they’d have probably not many options in Chile. Most men here expect women to take care of the family in the first place, not to have a career or a business. And so these women went to Brazil, Argentina and other places up north to build their careers while hoping to meet men who have a more balanced idea.

The Cafe con Piernas shows in a way of this issue. But when I spoke to men in Chile, they defended how this is part of their culture. In a Cafe Con Piernas, ladies serve coffee while they wear very little clothes. They conveniently walk on a kind of stage, so the patrons have a better view. Many business meetings are held in these places. It’s definitely something that I’ll investigate a bit further when I next visit Santiago de Chile again.

Being a digital nomad (or location-independent entrepreneur, so you prefer) sometimes can be a lonely existence. When I was traveling in South America, a couple of friends who migrated from NY to Santiago, extended their invitation to stay in their house for a few days. Happy to see them back, and delighted to hang out with friendly faces. The local Carmenere wine and the excellent meat Marco had on the barbecue made it one of the better moments of the 2016 journey!

When I was walking in the city for a day, at the advice of my friends, I stopped at one of the many street vendors. Curious about what the drink was they sold. The Chileans call it Mote Con Huesilllo. They make the drink from peaches. They cook and sweetened the drink. When serving, they add wheat to the drink, which actually can serve as a good afternoon snack. When you visit Santiago de Chile, worth a try. Now make sure we don’t see them being sold with plastic straws, and with a plastic spoon, and I’ll be happy to have some more. 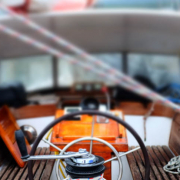 The travel to Antarctica begins!
2 replies