When Khongor arrives at my place, he introduces me to our driver for the next few days. The man lived in Germany for a while, he speaks some German and Mongolian. With Konghor speaking English and Mongolian, we have a language triangle going: Khongor and I talk in English, with the driver I talk in German, and the two have chats in Mongolian.

At the exit of the apartment, I notice it had been freezing that night. I’m pretty happy I bought a body warmer jacket in Irkutsk when I was there a couple of days ago. It’s not just cold, but slippery with the rain that fell in the past days now transformed into ice.

You can’t drive every day

Mongolia has a severe problem with smog. One of the ways the government deals with that is by eliminating one in five cars on the road on a day in the week. On the day of our departure, the license plate of our car is up. We must leave Ulaanbaatar before 9 am: The 4×4 we’ll be using has a license plate that is flagged as non-driving in the city today. With the ban starting at 9, we make sure to be in the countryside long before that.

Our first trip takes us East from Ulan Bator. A statue of Genghis Khan has been built near the birthplace of his mother. The 40-meter tall statue of the Mongolian conqueror on his horse is made in shiny metal and can be seen from miles away. Having to leave the city that early means we got here too early. The statue and the grounds surrounding it opens at 9. As I’m the first to arrive, I can make my way to the top of the statue (with an elevator!) and have a nice view of the surrounding areas. Of course a selfie with the steel ruler of China, and we’re on our way again. Discovering Mongolia, as I will figure out in the next few days, means a lot of driving!

We ride through a national park a couple of kilometers from the Statue, on our way to a monastery. The term natural park has been the signal for some Mongolians to capture birds and keep them for the tourists to take pictures. I want to have a word with them about that practice, but both my driver and guide seem unhappy and convince me not to pick a fight with these people.

A bit further on our way, we stop at a very touristy spot: Turtle Rock. It’s main attraction is a very small hole between the rocks where you can climb through. It looks like I’ll never fit, despite that massive weight loss in the past 8 months, but hey! I get to the other side (and back!)

Khongor, a young Buddhist, shows me around the monastery when we get there. It’s the first time since we left the city that I feel some kind of rest coming over me. The monastery is on the hill, and the path to the stairs has tons of Buddhist wisdom written on signs. Taking the time to walk the path gives an incredible preparation for meditation in the temple. But not before you climb the 100 white and 8 black stairs that lead there.

Sleeping in a Ger

No, it’s not a Yurt: that seems to be the name used by the people west of Mongolia. In Mongolia, they call it a ger. And since the days before Genghis Khan, Mongolians lived in these mobile houses. If digital nomads is my current field of study, no better place than here to see where the traditional nomad culture lived on till today. 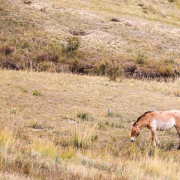 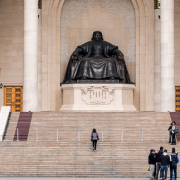 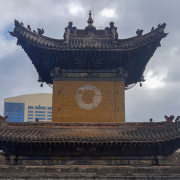 Karakorum, the Mongolia Countryside, and the broad definition of a Hotel
1 reply