On my travel to Thailand, I arrived in Bangkok only days after King Bhumibol Adulyadej died. Looking back at my first 24 hours in an interesting time in history to make my acquaintance with this country.

The travel to Thailand

While in Beijing, and working on my changed travel plans, I decided to travel to Thailand. It sounded like the ideal place to regroup myself. As I was working on a book and mini-documentary for a client, it would also allow me to finish the deliverables on time. [inlinetweet prefix=”” tweeter=”@boardingtoday” suffix=”#tips #workabroad”]Traveling as a digital nomad requires adapting the pace to the workload.[/inlinetweet]. No sooner than when I booked my flight to Bangkok, CCTV reported the death of the King of Thailand.

One of the things I feared about traveling to Thailand was to arrive in one of those somewhat cheesy locations. So when the government decided on the mourning period, I knew chances were I would be in Thailand on a less “party-prone” time.

And so I traveled. Beijing to Canton (now Guangzhou), onwards to Bangkok. The travel to Thailand was the first time in many weeks that I was back on a plane. After months on the Trans Siberian train, and adjustment. China Southern made me feel welcome again in my Skyteam family.

1. Travel to Thailand in the Rain Season

As soon as the plane hits the landing area in Bangkok International Airport (BKK), it’s pretty evident that it rained heavily here today. The rain season in Thailand is still going strong. Till November, we’ll have daily rain here. As a photographer, having the whole country in nice and fresh green is of course so much different than in a dry season. When I was in Costa Rica earlier this year, I witnessed the transition from the dry season to the rain, and still haven’t made up my mind what I like most.

After I arrived through immigration and customs in the main hall of the airport, I look for the transfer desk of the hotel. There is not just a desk: next to a door, a whole bunch of signs is attached to the railing. Some signs look very official, while many others are just the name of the hotel written by hand on a sheet of paper. When I find the name of my hotel, I point at it. A young man, who sits nearby behind the railing, calls the woman who seems to be in charge of “my” sign. And not just for my sign, I find out later: She’s making a living by directing the guests for these hotels to the respective shuttles. When she sees the tripod on my backpack, she tells me to be careful, as Thailand can be unsafe. Not bad for a first welcome. She calls the driver for my hotel, and 15 minutes later I’m on my way.

So many people were wearing black, so many pictures of the king who just deceased. I arrived in Bangkok 3 days after the monarch passed away. With 70 years being on the throne, and for many Thai being the unifier of the country, I can feel as soon as I’m arrived here, the impact of his death.

When the Belgian king Bauduin died in 1993, he had been on the throne for 42 years. So basically everyone in Belgium at that time who was 50 years or younger, only had known him as their king.  So I can relate a bit to the measurements that are taken now, and the emotions displayed by the Thai.

Didn’t see that one coming. Ignorance, of course. But cars in Thailand drive on the left-hand side. I remember my adventures behind the wheel in New Zealand, so I’ll know what awaits me in case I go out and drive myself. Maybe not in a car, but surely on a scooter in the next few days.

Being in Thailand, that’s living with grace and gratitude. When I was in Indonesia many years ago, I was impressed by how deep that is with people there. Arriving in Thailand, I fell the same respect that people show each other. Contagious! It’s one of the most appealing parts of the culture that I’d like to understand better.

China left me on my hunger. Or better, it left me in my thirst. Being in a country again where every corner has a coffee place, with an actual espresso machine and a love for good lattes, is a bonus. My first trip outside the hotel ended in a shop with both wifi and an espresso machine. The fact that it was a combination of a bicycle shop and a coffee place made for an interesting conversation with the owners. Traveling to Thailand meant being back near my regular fix.

7. An online business without credit cards

I bought a ticket from Bangkok to Chiang Rai online. When I had to make a payment of about 1600THB (that’s about US$45), and the security on my credit card blocked the transaction, I tried that other button: cash register payment, that was offered. The system generated and mailed me a code that I took to the 7-eleven neighborhood market (Oh, if you were not in Thailand before, you can almost always see the next of these shops from the one when you are in one: they are so close to each other). I showed the code to the cashier, they punched it in the system, and now I could pay by cash, credit card, and so on. Pretty convenient way, I found.

When I was on my way from the airport to my hotel, I already noticed most people wearing flip flops, and so the first thing I got out of the backpack when I arrived at the hotel were those, of course. Any country where I can change my uniform to T-shirt, short,s and flip-flops is a country with a promising start. Even while it seems my New York friends see my jeans, Allstars, and shirts already as a casual style ;-)

My bonus? A drink near a quiet river

At the end of my first day in Thailand, time for a gin&tonic in the hotel. The bar overlooks a quiet river, and I feel that this country and I might just get along fine for now. Curious to see what the south will bring. For the first 24 hours, not too bad. Stay tuned for the rest of my Thailand Adventures. 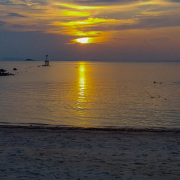