Before I made it onto Antarctica, there were 6 days underway in a small sailboat.

The crew on the Sarah Vorwerk was managed by skipper Henk. Mariel supported him as a right hand and as chief of the kitchen. Adding the 7 of us sailors, made our small crew complete. Argentina, Germany, Switzerland, the Netherlands and Belgium represented, and with the expats New York and Hong Kong had pseudo-representation. The language on board was English, with the occasional take-over by “the Germans”. All ready to be part of this adventure…

Not in a country

When you travel by plane internationally, you emigrate from one country, and when you land you’re in the next. Traveling by boat is the same, but different. On the first day of the journey, the crew presented itself at the Argentina Coast Guard (“Prefectura Naval”) to emigrate Argentina.

Extra stamps in the passports to show that was done. So now I had technically left Argentina. It would be about a month before immigrating again (in Chile). The travel to Antarctica had not only disconnected me from the rat race, but also from things such as being in a state/country. For this whole month to come, I was in no country, a vast no mans land. I liked the thought of that. Especially since that no-country was the internationally respected zone of Antarctica.

Be warned when you do the customs declaration in Argentina: All of the crewmembers had to declare all the electronics they carried, so we wouldn’t have an issue when re-entering later. A certain photographer who travels with too much gear, hates this part of the journey! (guess who…) Better know how much of what you have with you when you start this process. 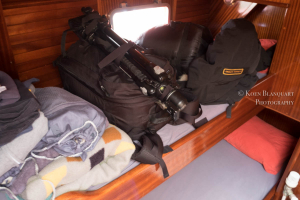 Some photographers have a bit more gear than others, when they travel to Antarctica

While you have of course not the strict limitations of an airplane when traveling on a small sailboat, there is the issue of the space to put your gear and stuff. Skippers can be the most friendly people you meet, but when you start loading their ships with tripods and small helicopters, you might meet someone who cares very much about the damage those can do to the boat. Fortunately our skipper found space for all the gear somewhere.

I ended up having some space in my bunk to sleep, and not to sacrifice the bed as storage. And it turned out that bringing this gear wasn’t only good for me, but that it came in useful for my new crew friends every once and a while. It allowed me to prepare the future travel to Antarctica, where I’ll take photographers on a workshop. Using different camera’s and types of equipment showed what will work, and what not… 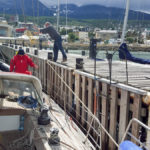 The Sarah Vorwerk casts off for the Antarctica Travel (Ushuaia)

The moment the boat left the harbor was one not too forget. I have been traveling before, but had no idea what was waiting for me on this journey. So when a friendly neighboring skipper disconnected the last mooring line, I felt the excitement. It was incredibly quiet on board for that moment.

Seeing the harbor of Ushuaia leaving in the distance, and meeting the first penguin in the water after less than 15 minutes of sailing, made it complete.

Before really getting in the oceans, there is the Beagle Channel between Ushuaia and the Atlantic Ocean, near Cape Horn. The red sailing boat left Ushuaia to the east in the channel, remaining on the Argentina shore to avoid having to repeat the immigration and emigration kafka with the Chilean government. The channel is the home to several animals. After having left Ushuaia in the early afternoon, Henk decided to throw anchor near Puerto Eugenia and cook dinner. Since conserving chicken isn’t that easy, we had a nice chicken dish. It would be the last chicken I ate for several weeks.

Our anchor place was the spot where I lost contact with the cell towers, starting the disconnected experience.

The next day, I woke up early enough to grab the sunset, and Henk set sail to the open seas. The feared Drake passage awaited. A group of bowsurfing dolphins escorted the vessel out of the Beagle Channel.

When leaving in Argentina, and going on Antarctica travel, there is no way around the Drake Passage. Passengers on cruise ships, with stabilizers on board, get sea sick here. So for the crew of a small sailboat it’s something to take into account.

Sailing the Drake passage isn’t something you forget lightly.

The secret of Mr. Drake

When Francis Drake discovered this passage between the Pacific Ocean and the Atlantic Ocean, it was of great importance to England. In those days (1578), GPS wasn’t what it is today. Even worse: sea maps where considered state secrets. That’s how it would take many years before other nations would discover this passage. 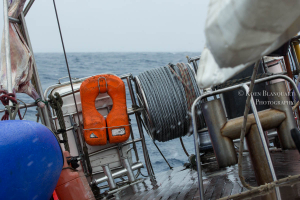 As soon as we had left the Beagle Channel, the water changed from a very flat water to what one expects an open sea to look like, but then better…

Sailing the Drake Passage for many people includes being sea sick. Our ship with 9 experienced sailors was no difference:  The team of 9 was quickly reduced to 3, as sea sickness forced some to stay in their cabin for a short or long time.

Most were able to get out after a while, but the benjamin on the boat has spent most of the Drake Passage in her bunk.

Interesting to learn that the people who sail to Cape Horn from Ushuaia get seasick in the Beagle Channel, while some people who sail to the Drake Passage will not get sick on that same spot. Not because they are so much different people, but apparently since our mind has a strong influence on if we get sea sick or not, suggesting it’s stronger than what happens in the stomach and the equilibrium of the body.

When passing the Drake Passage, around the 60th parallel South, the water dropped from 9ºC to 1º (thats from 50ºF to 33ºF), and goes then back up by 1 or 2 degrees. The water changes color. That’s when entering the Antarctica Convergence. The Antarctic Convergence is where the warm(er) water of the Oceans (Atlantic, Pacific, Indian,…) meets the waters of Antarctica.

An iceberg in the Southern Ocean

And so from here on, the crew was on the lookout for icebergs. Henk had divided us in teams of 2, who spend 2 hours on deck steering and searching for the big white blocks of ice, exchanged with 6 hours of time in the cockpit to enjoy the scenery or below deck. The days were getting noticeable longer than they were in Ushuaia. And I hoped that the crossing  of this convergence would soon result in touching land on Antarctica!

This article is part of a series, describing my travel to Antarctica in February 2016. Follow on http://blog.blanquart.be/antarctica to see where it goes from here… 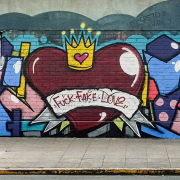