Second visit to Seoul, but this time more than a quick hit-and-run. So here’s what impressed me in at first in Seoul:

When I ended my Trans Europe and Asia train ride, Seoul was the point of departure back to the USA. The short glimpse I got from that earlier visit to Seoul made me hungry for more, so I decided to start and end a trip to Japan and South Korea in Seoul.

My first happy encounter with the Korean Culture was the realization that South Korea has a coffee culture close to the one I had seen in the USA.

In the last 20 years, coffee has evolved from a drip coffee with condensed milk (as is still served in Vietnam, for example) to espresso-based drinks. A company such as Starbucks has been active for 20 years in South Korea and they consider it an important market. Many local and regional chains have opened, and the quality of those small shops is often incredible.

Baristas in Seoul have also understood that not all of us have cow milk in our latte and they offer soy milk, almond-based milk, and other alternatives.

Another cool thing in the coffee bars: there is a law that stops the use of single-use cups for guests that drink their coffee in the shop. Besides the large international chains, Seoul has tons of local coffee shops.

We stayed in a nice hotel in the center of Seoul. The welcome gift waiting for our arrival was Korean Rice Wine.

Every set of travel tips for Seoul should include this wine ;-) Visit Seoul and its rice wine!

So here I am, in the city that hosts Samsungs headquarters, Android central if you like. And my Google maps are useless. Can’t find places, can’t calculate routes and seems to be missing much of the data that makes navigating Seoul easier.

Finding the Namsan cable car entrance to Seoul tower? Walking directions to Changdeokgung Palace? Need opening hours for your favorite tea house? Google had no clue. A first in my travels.

Using Google Maps here won’t help you much, but fortunately, there is Naver for Android (or for iPhone): this app has the ins and outs of the city and even shows the underground crossings with the right door numbers to navigate Seoul efficiently.

Little issue with Naver is that you can’t create an account in Seoul when on a US phone: when the international dialing code is different than the location where you are, creating an account will fail. VPN to the rescue…

For a vegetarian/flexitarian, South Korea isn’t the easiest place on the planet. Chicken cafes, Barbeque places, and their likes are the backbone of the food industry in Seoul.

Very few places have options on the menu that appeals to non-meat-consuming humans. When I visit Seoul, being more flexible on flexitarianism became necessary.

All the places we visited had a decent wifi connection. The digital nomads among us can rest assured: in Seoul, you’ll find a fitting spot to get work done and stay connected.

Seoul has tons of places that look like a bar but have a pretty extensive menu of chicken dishes. Keep in mind these dishes are large and will feed probably two or more…

With a beer, this can be a cheap and fast substitute for dinner.

Seoul has tons of cat cafes, found on higher floors in the busy streets in the center. The entrance fee covers the first drink, made in an espresso machine where the felines walk over. Not sure that’ll work anywhere else when food inspectors would walk in.

The barista greets us with a hand sanitizer and a large plastic bag. Personal stuff goes in the bag so cats don’t take them for toys. He explains the rules, such as not picking up cats from the floor, and where we’d find the cat toys.

Soon it starts to dawn on us that the cafe has one strange thing that distinguishes them from cat cafes in Europe: these cats aren’t up for adoption. The owner has created a space where they can keep (too) many cats, and make some money. This is more about an income than about the well being of the animals.

Many shops in the Myeongdong area are open later, attracting many locals and tourists in the evenings. Street food in all kinds of tastes combined with local and international shops. It’s one of the things to visit in Seoul, but at the same time, it’s a lot of the same stores and food.

Everything makes a different noise

Every device in Korea makes a noise. But never the noise or sound you expect. It takes a while to get used to unusual sounds and where they come from.

When the luggage arrived in the airport and the carousel started, the universal annoying buzzer announcing the start of the conveyor belt was replaced by a piece of electronic music based on Bach.

Elevators have all kinds of noises, except for the bell you’d expect to hear.

In many restaurants, a buzzer will stick to the table. It’s a way to call the waiter. While it feels very intrusive, it’s part of the way business goes, and actually pretty efficient.

It’s unreal to stand in an ancient palace and see the highrises surrounding it. The views of Seoul here give a good feeling about the history and the present of this metropole.

The National Folk Museum of Korea is located next to the Gyeongbokgung Palace. Both inside the museum (a pagoda) as in the surrounding garden

Building by Zaha Hadid, who also designed the Antwerp Harbor house. (for the Port Authority in Antwerp) . The center became the epicenter of the visit to Seoul on this trip.

The Dongdaemun Design Plaza has an atrium with a coffee corner and wifi. A quiet place to get some work done, and to plan the discovery of the rest of the city.

Cheonggyecheon stream is an oasis in the middle of the city. The river banks are great to walk, especially on a sunny day in fall. Quiet areas, running paths, river crossings over large stones and art, what can you expect more?

South Korea is still at war with North Korea, despite the armistice signed in 1953. So for me, one of the things to visit in South Korea is definitely the Museum of War in Seoul.

The old station in the middle of Seoul is one of the most remarkable buildings. It has been extended with a modern annex, where most of the actual train services (ticketing, gates, shops) are located.

Many travelers warned against buying same-day tickets here. That turned out to be no issue at all. Buying tickets and some Korean snacks for the train took under 20 minutes. Reserved seats and all.

Moving on, to Busan

It took the high-speed train less than 3 hours between Seoul and Busan, in the South: the next stop on the Korea-Japan journey!

The header image of this post appeared earlier on Koen’s Instagram feed. Most (not all) pictures on this trip were made with a Samsung Galaxy S10. I traveled without much camera gear as an experiment and a personal challenge. 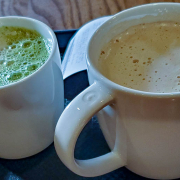 When “for here or to go” has legal consequences… 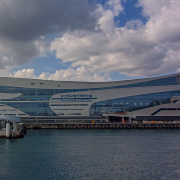 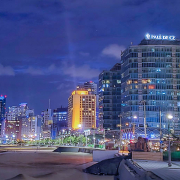 Busan City – the gateway to Japan
Scroll to top