When we started our research, we were looking for the changes the information age has brought to the way we work, and how that’s sometimes complicated for organizations to adapt. It was called the “New Way Of Work” (NWOW) in all the conferences where we went.

Over the past years, the term Digital Nomad came up. And immediately, a group of these nomadic workers disliked the term and searched for alternatives. That included “bohemian” and “location independent entrepreneurs.” In the same movement, some nomads were unhappy when for example traveling yoga instructors, or divemasters started to refer to the same movement.

So we’re with them, out there, seeking for a better term for all these Location Independent Workers.

The evolution that leads us here

Around the year 2000, organizations started to look at a new way of working. We moved away from dedicated desks to flexible workspaces, where the employee would find a desk in the office building that suited him or her best for the work they were assigned to. Gone were many of the very personalized desks, since one now had no idea what spot they’d be working in the next day.

Costs were the first driver to change the workplace

The reason behind flex desks had less to do with giving freedom to employees, but everything with costs. If 20% of your workforce is out, be it working with a client or on vacation, businesses realized, you might cut back to 80% of the office space and still have a seat for everyone.

While this was driven by cost optimization, it started an evolution. Next thing you know, we had rolled out laptops to all workers, since this was easier to keep them moving from one desk to the next. And soon, employees and employers realized that part of the work could be done from home. And we see organizations adding a home-work day to the schedule.

My home is where my laptop connects

It didn’t take long before the smarter people in the room had realized that ‘homework’ could as well mean working from anywhere. And organizations realized that it all of a sudden became much easier to hire staff that was remote. Because finding talent near the headquarters became a challenge, And it’s a or because salaries in other areas might be a bit lower for the same quality of workers.

The work arrangement becomes a lifestyle

It’s a small step from remote work in your location to creating a location independent lifestyle. Workers would hardly ever show up in the office, but still, be a valuable part of the team. Video conferencing, cloud storage applications, collaboration tools, and other technological improvements made the distance less of a problem for both the company or the team it hired. Now you could travel the world and still be paid if you managed to combine work and travel.

And now we’re in business

It didn’t take long before people working remotely found ways to add online businesses, or social media gigs, to their repertoire, and they increasingly became independent contractors and freelancers. The gig economy allowed skilled workers to get exactly these jobs where they could make a difference. Clients could find the best person for a specific task in the organization without having to hire a fulltime employee.

Some digital nomads started a travel blog. Some to share their experiences, many to seek an extra income.

To live and work this lifestyle feels a lot different than the traditional job idea we had. But for most of the location independent nomads we met, it allows them to combine the passion for travel with a sharp understanding of the value they could deliver. And when loneliness kicks in, or the style had lost its appeal, they still could return to a more classical lifestyle. Or they organized the travel pace.

Build a business and they’ll come

The digital nomads became a market with specific needs. So more and more businesses started to deliver tools services and specific products catered to digital nomads. Lists showing where to go and find a good accommodation, real estate developers who combined coworking with cohousing, and so on.

Our documentary looks at the fourth industrial revolution. We discuss with location-independent workers about how they believe to be a thriving part of that revolution. We seek to understand what society can learn. 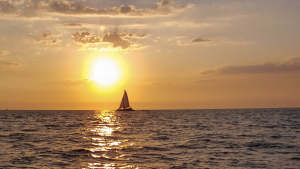 Location Independent Workers are known to show off the beautiful locations where they reside. 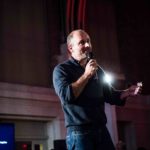 Koen Blanquart speaking about the combination of travel and work

Digital Nomads & Location Independent Living is built upon the ongoing research for a documentary. Produced and edited by Koen Blanquart and Boarding Today. These articles and findings are only a subset of what we are working on.

Koen Blanquart is a public speaker on the topic of Digital Nomads, Location Independent work, and entrepreneurship. Besides this research, he’s working on an environmental project and as a consultant for some cool startups as well as innovative projects in larger organizations.

Boarding Today is a magazine about travel experiences.

Digital Nomads, Travelers with a Laptop, Location Independent Entrepreneurs, … call it what you like, but there are more and more people who travel and work at the same time. We’ve started researching this phenomenon in 2014. As we finish a documentaries series, we like to share some more generic information about it here… 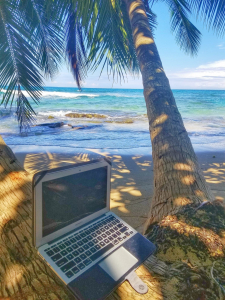 People who promote the digital nomad lifestyle will often show pictures of the fine locations they work in.