On my trip in Peru, Arequipa was my second stop. I stayed in the Hotel San Agustin Posada del Monasterio.
After a short night in Lima, I traveled south on my trip to Peru. I flew in to Arequipa, and Willmar, my guide and fixer for the next days picked me up. He dropped me at the hotel so I could get some rest before we left for the mountains to seek the condors.

This 3 star hotel has a prime location in Arequipa. The Monasteria de Santa Catalina is across the street. The Plaza Des Armas, the central square, is a 1 minute walk. I very much like the entrance of the hotel. Once you pass the gates (this might not be Lima, it’s still Peru) you enter a patio that gives access to a coffee store, the reception and the bar.

The breakfast had a variety of bread, cheese, ham, eggs and juices. The restaurant is in an older part of the hotel that has been nicely renovated. If the weather allows (it did when I was there) you can have your breakfast in the garden adjacent to the restaurant. 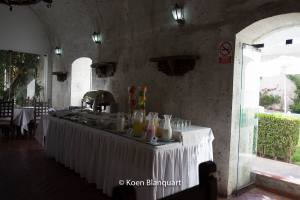 Breakfast buffet in the Hotel San Agustin in Arequipa 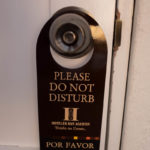 As the hotel San Agustin is located in the center of the city, it’s close to one of the nightclubs of Arequipa. I heard travelers that had very noisy nights that prevented them to sleep till 2am. I didn’t had much trouble. Construction workers early in the morning, and their radio (aah, South Americans, I sometimes hate you!) were what woke me up.

I stayed on the San Agustin Hotel for 1 night, before I went out to go and take pictures of the Condors in Chivay and Cabanaconde. When I came back in Arequipa after a couple of days, it was to take the bus that night to Cusco. But the hotel accepted, as I stayed with them before, to store my backpack while I spend some time in the city of Arequipa. 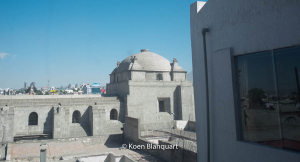 The church in the convent across the street

If you’re twenty-two, physically fit, hungry to learn and be better, I urge you to travel – as far and as widely as possible. Sleep on floors if you have to. Find out how other people live 7/9 and eat and cook. Learn from them — wherever you go.