Saigon played an important role in the Vietnam war. When visiting the city, there are two places where you can witness what the Vietnamese lived during the Vietnam war: The Cu Chi Tunnels and the War Remnants Museum.

you can find this museum in the center of Saigon. From most hotels in HCMC in districts 1,3,5 and 6, you’ll get there for 10,000VND. The entrance fee for the museum is 15,000 VND (2017). There’s an open-air part with airplanes, tanks and a prison, and a museum that has been set up to walk from the upper floors down to the ground floor.

The war ended officially in 1975, but the effects last to this day. The amount of dioxin that the USA dropped on the land in Agent Orange is staggering. And while the 2.8 Million (!) US Veterans are entitled to some compensation when being exposed to it, the Vietnamese people have to deal with it on their own now. Birth defects are still above average here. The museum shows how some of the victims have done extraordinary things: there is a swimming champion, a woman who biked around Vietnam, and so on…

There is a wide collection of pictures and posters showing the movements around the world condemning the USA for the war in Vietnam, and asking for peace.

With the USA  still not accepting the authority of the International Criminal Court, this is a difficult point to discuss with Americans. The museum documents some crimes done by the US GI’s in this country that should (have) merit(ed) a treatment by this court. Some of the pictures and stories are shocking. Many visitors – with them many Americans – have difficulties going from one story to the next.

So, all in the war remnants museum in Ho Chi Minh city isn’t made to come out with a big smile on your face. But when you’re here, it’s time to have a look at the other side of the story.

2 hours north of Ho Chi Minh City, the Cu Chi Tunnels give a unique insight into how the Vietcong lived in tunnels. I booked a tour to have a look. On the way there, our minivan made the first stop in a factory where victims of agent orange make small art for the souvenir shops. That included this fake Tintin in Vietnam drawing…

Arriving at the museum, I wished I had brought my insect repellent. This is not the city, and still, an area where dengue fever and malaria might happen (even while the risk is very low). Make a mental note that repellent will be, just like TP, part of the everyday pack…

The whole procedure of getting a ticket (a double ticket actually) and the entranceway is so showing that this has been created without any feel for the cost of salaries (everybody had a job here) or any efficiency. But that in itself might be the best way to enter the communist side of this war.

The tour shows a video, a tunnel entrance built to take a picture, some entrance holes, sniper alleys, and gives a good view of how life must have been here. Pretty amazing if you know that we’re in the South of Vietnam, controlled by the Americans and the South Vietnamese army and that the tunnels were less than 10 miles away from one of the American bases.

During the whole visit, you hear gunfire. The place has a shooting range. I felt that being very much out of place here, but seeing the number of people wanting to go and shoot machine guns, I was apparently a minority.

The highlight of the visit is entering a tunnel (yep, enlarged to let us larger western people get through it. After 20 or 40 you can decide to exit the tunnel, or you can crawl all the way through the 130-meter long tunnel. A guide goes first, and there are some lights in the tunnel.

The last stop before we all got herded into the souvenir shop, is a kitchen where we taste the tapioca roots (yummy!) and some tea.

I left HCMC at 8 am, and before 2 pm the van dropped me back off in front of my apartment.  Happy I saw it, but not that spectacular it will be on the “do again when I’m here”-list. The whole trip inspired me to go and search for the Billy Joel song “Goodnight Saigon”, and find some more of the sounds of the Vietnam war era.

Remember Charlie
Remember Baker
They left their childhood
On every acre
And who was wrong?
And who was right?
It didn’t matter in the thick of the fight 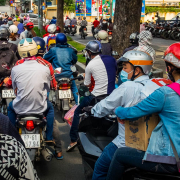 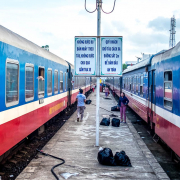 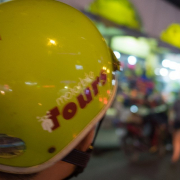 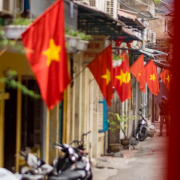 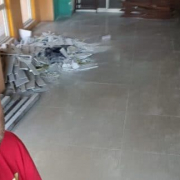 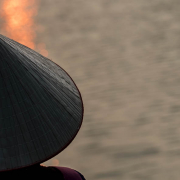