Ciudad del Este in Paraguay was so not what I expected in South America, or was it?

When I was visiting the area surrounding the Iguazu Falls in both Brazil and Argentina, I took advantage of being so close and decided to go and have a look in Paraguay. And Paraguay was nothing like the places I had visited up until that moment.

Ciudad del Este is across the bridge from Foz de Iguazu in Brazil. I hired a local driver to get me to the bridge. He refused to cross by car. We parked in one of the private parking spaces near the border and walked. The border patrol in Brazil was smooth sailing. But in Paraguay, it took way longer. Despite nobody in front of me, the officers needed forever to see who’s turn it was to work a bit.

When walking down the bridge, I saw a group of scooters. The gentlemen who drive them are some kind of a courier service for the goods you buy at this side of the border. The main reason people cross from Brazil into Ciudad del Este is the difference in sales tax. Products are so much cheaper on the Paraguay side. And so, and soon as you enter Paraguay, you find the streets filled with street vendors.

The stores and shops, as well as mobile street vendors, sell all types of counterfeit items, firearms, etc. in the streets. Nothing hidden. The border with Brazil is 300 meters away from these shops, and for people from Brazil and Paraguay, there are as good as no checks at the border.

I visited a photography store, but the lenses they sold seemed to be refurbished, or at least often repackaged, while the vendors claimed them to be new. And while the prices are indeed (much) lower in Paraguay than they are in Brazil, they’re still not that much better than in the USA. So beware. It was a pretty short visit since my driver felt we should head back at a certain point to keep more time visiting the Brazil side of the Iguazu Falls. Not a place that’s on my “Must-return” list.

The day I visited Ciudad del Este, my camera broke down. So I’m happy I found a great picture as the cover image. Used under Common Creative License from Timon91/Flickr. 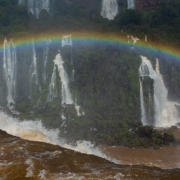