A City trip to Istanbul, Turkey

Three days on the border of Europe and Asia. My first discovery of Istanbul, Turkey. Ending the year with a short break: Time to explore Constantinople.

A city that was the scene of multiple James Bond movies has to be part of my travels, so I was really happy when the opportunity came to visit this junction of Europe and Asia.

During the three days in Istanbul, the first thing that struck me was the cats that roam free in the streets. Many of them pregnant, so the problem is far from being over.

The mosques on the hills, the small streets, the smells of exotic herbs and the omnipresent signs of a turbulent past made Istanbul definitely worth the visit.

The old city center, where much of this trip took place (Sultanahmet), allows discovery on foot. Many of the streets here are pedestrian zones, and where cars are allowed they tend to go very slow during the day. The tramways help for the longer distance.

Uber and taxi – getting around

Uber had its share of problems in Istanbul. The service now offers only a cab-hailing option. Choices include regular taxis, yellow fiat mostly, and blue cars that are a little more spacious and comfortable.

Getting a taxi via Uber to enter the city is pretty straightforward. When leaving the old town, however, most drivers asked where the ride went. Not answering resulted in having your ride canceled. Answering typically made the driver cancel or ask a higher fare.

Uber has some work with their associates in Istanbul to make this a reliable service one day.

While I was able to pay most of the time with credit card (Visa/Mastercard, only a few places accept American Express), taxis only took cash payments: Euros, Dollars or Turkish Lira.

Istanbul has a wide network of tramways, that can get you around in the city as well.

Driving in Istanbul is different than what I expected. On the one hand, is it a bit of a wild west (wild east?) mentality and the right of the strongest seem to count. But at the same time, it feels more relaxed than in New York at moments: when a car blocks the street to unload for example, people patiently wait without ventilation their frustrations with the horn.

Having an SUV of an expensive brand apparently permits you to ignore red lights. At many intersections, I saw large four-by-fours passing the red light and ignoring all other cars or pedestrians in the crossing. Watching both sides even at a green light is what a visit to Istanbul taught me.

The Hagia Sophia is one of the oldest buildings in Turkey, and even in the world, with an incredible history.

The name Hagia Sophia refers to the greek for wisdom (sophós). In Turkey, the building is known as Ayasofya Müzesi. As a church, it was known as the Church of the Holy Wisdom.

Knowing this building dates to the 6th century made quite an impression on me. Emperor Justinian I had this monumental construction built as a church. It was here that emperors of the Eastern Roman Empire were crowned.

The church went from Byzantine to Greek Orthodox in the 11th century and became a Roman Catholic Cathedral in 1204. It was Greek Orthodox between 1261 and 1453 when the Ottomans converted it to a mosque.

The Ottomans plastered over the Christian symbols to hide them and decorated the building in Islam tradition. The names of Allah and Mohamed were displayed in the front, and stairs and a gate were constructed in the direction of Mekka. During the Ottoman Empires, the Hagia Sophia forgot her Christian past.

After the creation of the Turkish state, the mosque became the museum it still is today. The Christian symbols were uncovered and are now displayed next to the Islamique religious ones. Since the mosque is now a museum, no need to take off your shoes when visiting.

The rich history of the Hagia Sophia makes it the perfect starting point to discover Istanbul. It’s an excellent reference point to understand the meaning of other places and buildings in their era. If you can have a guided tour here, don’t hesitate.

The Hagia Sophia was another scene in the Sames Bond movie “From Russia with Love” with Sean Connery.

The slippery slope takes you to the balcony where the empress would sit during church. It gives a spectacular view over the building, even while it is currently (and will be for a while longer) being renovated.

This mosque, built in the 17th century, is located close to the Hagia Sophia. Even on a cold December day, there was a pretty long line to enter the building. The mosque provides plastic bags to carry your shoes, but a responsible (and warned) visitor should bring their own: with thousands of visitors, these plastic bags are a crazy waste.

The mosque is closed for visitors during praying, so plan accordingly.

It’s large, it’s crowded, it’s loud and it should be on a first-time visit to Istanbul. Maybe not to buy something, but definitely to see the bazaar in action.

Salesmen will gently lure you in their shops to sell you jewelry, carpets, souvenirs, leather jackets or some counterfeit goods. Over a cup of tea, the discussion about price and conditions will be held.

There’s a bonus for the Bond fans. Remember that scene on the motorcycles in “Skyfall”? That scene was set on the roofs of the Grand Bazaar.

10 minutes by foot towards the Bosporus from the Grand Bazaar, you’ll discover the Misir Carsisi, the spices market of Istanbul. Very nice to visit, but prices are soo much higher than what I saw in the shops in the streets for the same products. Vendors tend to be a tad more assertive here than in the Grand Bazaar.

Many stores outside the bazaar have caved for fixed prices. Inside the bazaar, you won’t find price labels. You’ll have to make sure you and the salesman agree on how much you’ll pay for an item.

As a vegetarian, vegan, or any person actively trying to reduce their meat consumption, Turkish cuisine hasn’t had many options. Indian restaurants are a good call when you try to have something else but meat dishes such as Kebab.

But you won’t go hungry. The Turkish culture of having sweets in the afternoon could seduce me to try more baklava, Turkish Delight and Lokum than I ever had before…

The Cistern was a water reservoir and purification system, since the earliest days of Istanbul. The largest of the many underground water reservoirs, the Basilica Cistern, is now accessible for the public.

At the end of the underground complex, two Medusa heads in stone are holding columns. One is placed upside-down, the other sideways.

And the true James Bond fan in me couldn’t help but enjoy the visit, even more, knowing that Sean Connery used the underground waterways to spy on the Russian Embassy in Istanbul

Topkapi Palace was the residence of the Sultan and his family.

Standing in Europe and watching the Asian side feels like something.

This episode reminded me of the previous time I spent some time at the Asian-European border. When I was traveling via the Trans Siberian Railroad, I spent some time in Yekaterinburg. Another spot where Asia and Europe touch on an important trade route.

Istanbul airport opened a few years ago and shows the ambition of Turkey to become the hub of the world. The vast airport, about an hour away from the city center, wants to become the busiest in the world.

Immigration at arrival worked extremely efficient. But then again, if you’re used to the unacceptable long lines in New York, many airports score better.

The hotel had arranged airport transportation, but taxis and uber (see higher) operate well here. Public transportation takes you twice the time to reach the center.

I am a massage lover. So when an opportunity presents itself to visit a spa, I can’t resist. Experiences in Thailand and Indonesia made me curious about Turkish Baths. And they did not disappoint.

After spending a few minutes in a warm area, like a sauna, the therapist guided me to another hot room, where warm water was flowing in marble basins. For ten minutes or so, I rinsed off with the warm water.

Next, the masseur scrubbed me all over with a special cloth. It’s a miracle I still have skin left, but it felt great.

The next stage was a revelation: while laying on a warmed stone platform, tons of soapy bubbles are covering you, and the therapist starts a combination of a bath and a massage.

A tea, some sweets, and a relaxing bed to recover, and in about an hour I was back on the streets. All clean, warmed up and relaxed.

With only three full days to visit Istanbul, a few things were left on the table:

Where to stay in Istanbul

The AC Hotel in Macka is 20 minutes away from the old center, across the Golden Horn. The Beyoglu area hosts many international hotels for all kinds of budgets. Via the Galata Bridge, there is very easy access to the other side of the city.

Staying in the old town will shave off some of the travel time, but drop you in the busiest streets of Istanbul. Especially during New Year’s eve a noisy option.

Istanbul has a few coworking spaces, such as Workinton. Prices are relatively cheap.

There are multiple stories and travel warnings about social media in Turkey. Digital Nomads being critical of the Turkish government have been brought to justice.

Istanbul, despite the difficult political climate, was a cool place to spend some days for me. Hoping to find some warm weather in the winter was not my best bet. 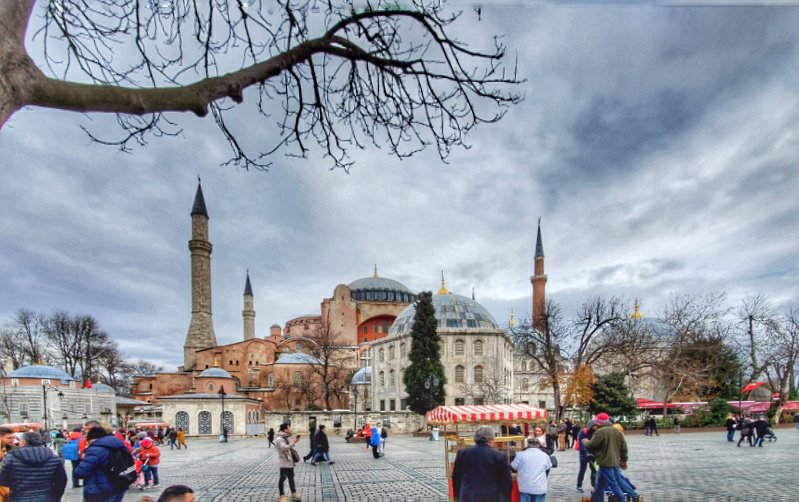 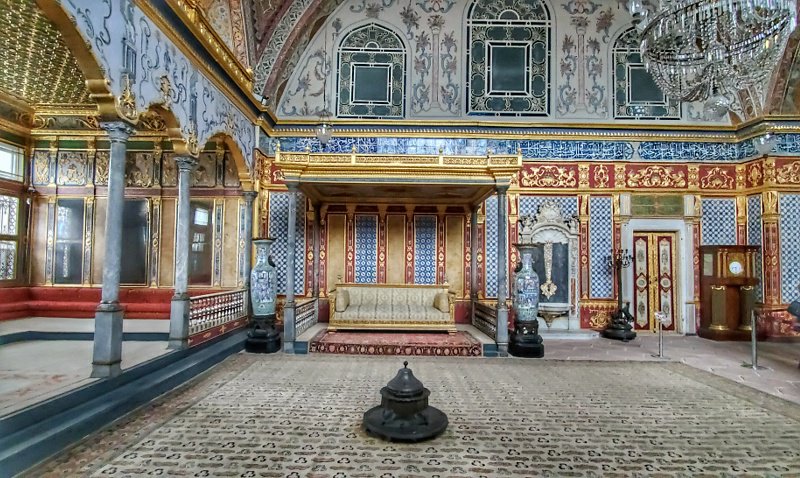 Because when you stop and look around, this life is pretty amazing.