During my stay in Vilnius, I was shocked by how present the threat of war is in the Baltic States.

While traveling, it’s amazing to see how the world looks so much different depending on where you are. Speaking to people in Berlin or in Paris, I had not the idea that Europe is heading for war. But the conversations I had with people in Vilnius, Lithuania, were giving me a much different view. An exposition in the center about the impact of war, NATO flags at the official buildings, and conscription (draft) being reinstated give a different view.

I’m reading The Next 100 Years: A Forecast for the 21st Century, a book by George Friedman. (Thanks to Frank, for recommending this to me!) He discusses the importance of the Baltic states in the balance of powers that Russia needs in order to feel protected. The Baltic states being part of NATO brings the western alliance at a few hundred kilometers of Saint Petersburg, When the Baltic states and Poland were under the Warsaw Pact, that distance was 1500 kilometers

It was a surprise when I walked past the presidential palace to see that the three flags in front of the building were the Lithuania flag, the European flag, and the flag of NATO. Especially since the USA seems to entertain the idea to elect a president who will not protect these states despite the importance of NATO for the west.

The Baltic states as buffer

Richard Shirreff, who stepped down as NATO’s deputy supreme allied commander Europe in 2014, expressed concerns in his criticism towards the UK government that Russia now not only borders NATO but that NATO also cuts of the Russians access to the weapons and fleet in Kalingrad.  He warned for war with Russia.  Jeffrey Tayler before mentioned, “If NATO expands to include the Baltic states, it risks acquiring a flashpoint for tension with Russia that could compromise, if not destroy, the alliance.”

Despite following the news in the USA and having many conversations with friends around the world, it was only after I arrived in Vilnius and I started having discussions with people here that I felt how close a potential conflict in this region is. I’m not a pessimist, and I’ve not started to hamster food and soap or even to build a shelter. It’s merely the confrontation with the possibility that struck me.

War in the art

The Vilnius academy of the arts has a reputation in the wide region. Many international students come here. I had the chance of visiting an exposition that covered “war”. In New York, and along my trip across Europe so far, a war in Europe wasn’t much a topic of conversation with the people I met. Not so in Lithuania.

Last year, the Lithuanian government reinstated the draft (conscription) for Lithuanian boys. Photographers Neringa Rekasiute and Beata Tiskevic gathered 14 of them in front of their lenses and documented the grieve this created for the 37,000 men that were called under the arms. After seeing these portraits and being pretty much touched by the artworks, it seems the works and the events provoked two types of emotions:

Even while only being in Vilnius for a couple of days, the issue lived more in the streets than I expected. 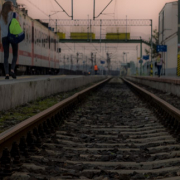