The first stop in my Trans Europe and Trans Asia project brought me to London (UK), where I could find a bit of time in my busy schedule to see some attractions:

Crossing the Atlantic Ocean, from New York via Boston to London got me started for my project that will hopefully include Europe and Asia in the next weeks. First real stop: London!

Where to stay in London?

I stayed at the Club Quarters, near Trafalgar Square. I’m not a member with the Club Quarters chain, but their promo was pretty appealing. The check-in feels a bit weird, as they share the entrance with another hotel. But once you are in the area that the hotel controls, you feel at home pretty fast here. The room had all I needed to both have a good base in the city to work and stay, and all the things I could need in a very close walk. A 24/7 super market down the block for all one can imagine to need when staying in a hotel.

What to visit in one day in London

With a hotel that is less than a minute from Trafalgar Square, this was of course the place to start this visit to London. Ever since one of my friends tried to convince me that London was so much more interesting than New York, I’ve been here. Probably the equivalent of Times Square here, but hey: here I’m the tourist!
You know it takes a while to understand how the different parts of a city fit together. And when that happens, you start to appreciate the place a bit better. My walk between Trafalgar Square and Big Ben was one of those moments that the puzzle started to fit. I started to see how the parts of the town are interconnected. And the rest of that walk towards Buckingham Palace gave more of these clues. I love when that happens.
At the waterfront of the Thames, I found several cool places to get some work done. The Whitehall gardens and the nearby coffee stores make it a good combination to get work done that requires to be disconnected/connected.
I had to get used again to see and smell people smoking in the parks. having spend the last years in New York with Bloomberg as our mother-in-law has made on the smoking level of New York a city where smoking isn’t that present. So it seems in Europe I’ll have to get used to that again.

No, not been on London Eye this time. Traveling solo has its perks, but some things (in my mind at least) need to be done with a friend or partner.

A beer in SoHo was the last part of the day, catching up with some friends I hadn’t seen since they said goodbye to New York a couple of months ago.

A bit to my surprise, finding a place with an acceptable wi-fi was not that easy. But fortunately in the center of London there are a few chain coffee places that accept using wi-fi, and my hotel had a more than decent communication. But if you know cool places in the heart of London that have character and allow you to work there for a couple of hours, thanks for commenting under this post. The cost of London is pretty well known, and not the budget location some digital nomads might be looking for.

The Statistics of the Trip

I keep track of a couple of things in the project page for the Trans Europe and Asia page, where I keep a map with the (past and planned) trip, and the statistics on the traveled miles (in kilometers.) 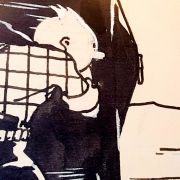